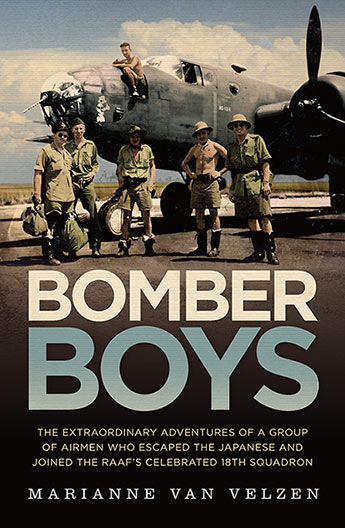 The essential story in this book makes for engaging reading. It is a composite story of the exploits of a number of Dutch East Indies bomber pilots who escaped Java just as the Japanese were invading in early 1942. I use the word “composite” as a number of them did not want their names mentioned, for reasons which are perhaps obvious when you read the book.

These Dutch pilots escaped to Australia where they were, reluctantly almost, absorbed into the RAAF (No 18 Netherlands East Indies) Squadron. They were treated poorly by the Australian hierarchy in terms of the aircraft  and facilities made available to them, but on the other hand, they gave the impression of being undisciplined and therefore did not endear themselves to the RAAF.

On reading the book, one could hardly dispute that there was good reason for this. Flying bombers under the Sydney Harbour Bridge would not endear them to their superiors, nor would a plan, fuelled by too much alcohol, to fly back to the Dutch East Indies, even though they were occupied by the Japanese, in order to rescue relatives.

The ending is inevitable, but appropriate. The author does pick up on a lot of the hardships which I know were endured by pilots who were based in the Northern Territory, in particular at Batchelor which is a little south of Darwin just off the Stuart Highway and is still used for aircraft maintenance to this day.

However it is most disappointing in that the book contains a number of what I would call, obvious errors. Whether they are the fault of the author or the people who related their stories to her, I cannot say.

There are errors such as the reference to the Lockheed 12 which was used by two of the pilots to escape to Australia, having one engine in one paragraph, and two the next. (It has two engines). The description of a forced landing due to fuel starvation contains errors in the procedures taken that no experienced pilot would have made.

The suggestion that lights were needed to steer the plane safely between the mountains is completely wrong.

Two of the central characters (who the author explains are not real people but were created for the purpose of the book), are said to have removed the tail plane of one aircraft and replaced it with the tail plane of another one, before flying the resultant repaired aircraft to Australia. This is said to have been achieved with coins for screw drivers. No mention is made of the control cables for the elevators, trim tabs and rudder which would also have had to be removed, re-tensioned and replaced nor of the many rivets which would have had to be removed and replaced.

Furthermore, the pilots are said to have used “good old duct tape” to fasten an additional fuel line to a wing.  Duct tape was not invented until 1942 to the best of my knowledge and it is most unlikely that it would have been in Java at that time. It certainly would not have been known as “good old duct tape” if it had just been invented.

This aspect of the book strains credulity.

Apart from aviation errors I doubt that anyone would agree with the description that Alice Springs was the last stop before heading inland. It would be hard to imagine a place in Australia which is more “inland” than Alice Springs.

The  claim is made that the warning to Darwin of the impending arrival of the Japanese aircraft  on their first raid, came from Sergeant McDonald, from his HQ just north of Darwin city, rather than as seems universally accepted, Father McGrath on Bathurst Island.

Several times I nearly stopped reading the book because I was so distracted by what I regarded as errors but in the end I was glad that I continued to the end as it is a rather nice yarn.

My message is not to treat this as an accurate history of these pilots’ exploits but as a story moulded together by the author from the memories of the survivors of these air crews, containing some actual events and, probably, some stories distorted by time and fading memories.

Reviewer’s Note: Let me say that I have been a pilot for just short of 40 years so I have a lot of experience of aircraft and flying.

PrevPreviousAt Home in the World: Women Writers and Public Life, from Austen to the Present by Maria Dibattista and Deborah Epstein Nord
NextThe New Neotropical Companion by John KricherNext
Scroll to Top