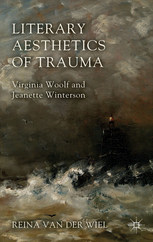 In this densely written and complex book, Literary Aesthetics of Trauma: Virginia Woolf and Jeanette Winterson, the author seeks to ‘open up a creative new avenue for literary applications of trauma theory’ (1). Reina van der Wiel sees benefit in moving on from being trapped within traumatic experience, endlessly repeating it in artistic form, becoming stuck in Freud’s ‘remembering, repeating, and working through’ at the repeating stage, and to use British Object Relations Theory to explore symbolisation, thinking, and working through of traumatic experience instead. She argues for a shift in ‘conceptual emphasis from traumatic memory to the role of thinking within trauma’ (1) using neo-Kleinian psychoanalysis. The theoretical framework of her book is modernist, with the author arguing for the role of reason and thinking in making sense of experience, including traumatic experience (14). She also is careful to make a distinction between different writings around trauma: in this book she is concentrating on works of literature rather than narratives of trauma, as her concern is with the aesthetic transformation that distinguishes the two forms (12). The author seeks to propose an ‘alternative literary aesthetics of trauma’ based on the ‘distinction between symptom and symbol, and between repression and symbolization’ (26).

As her title suggests, the two authors she discusses in great depth are Virginia Woolf and Jeanette Winterson. The former sought to experiment with the novel form, using abstraction and distancing methods to present traumatic experience, particularly the death and destruction associated with World War One. Woolf’s writing becomes increasingly experimental because she is searching for ways to express suffering (34). In discussing Woolf, the author aims to ‘draw together the modernist turn to abstraction and spatial form, read through a model of cultural crisis or trauma, and the psychoanalytical concept of symbolization’ (72), especially Woolf’s use of abstract form of narrative in the 1920s and 1930s and the process of symbolization. This process involves a ‘mental development towards psychological distance, reflection, and creativity’, an abstractive process that counteracts the damage done by trauma to the ‘capacity to think through successful containment of unbearable emotions’ (72). The literary form can be a container by offering a means ‘to control, transform and gain distance from traumatic emotions’ (72). The ultimate aim is to express and transform personal trauma into art. The subject of war is all-pervading in Woolf’s work, showing a connection between public and private violence (84). Louise de Salvo has also noted the presence of the ‘hurt child’ through all of Woolf’s novels (29).

I found particularly interesting the author’s discussion about Woolf’s preference for indifference, solitude and silence and how it clashes with the ‘prevalent idea that trauma requires an empathic listener to bear witness’ and with ‘the keystone of object relations theory’ (144). Wiel offers Winnicott’s theory of the ‘isolate’ as a ‘structural model for reading Woolf’s approach’, that ‘each individual is an isolate, permanently non-communicating, permanently unknown, in fact unfound’, and that this is ‘the personal core of the self’ and an important part of mental health (145). Woolf argued that there is a ‘zone of silence in the middle of every art’, something not able to be expressed in words, which she was not completely able to explain (148). She found comfort in the idea that ‘nature and art will exist beyond a human life’ and that the ‘bigger picture overrules personal suffering’ (148). As my own research and writing involves bearing witness through memoir, I find this argument challenging, but the idea of an unspeakable part of ourselves rings true nevertheless.

The author argues that Jeanette Winterson, although originally championing the modernist approach, came to write three novels—The.Powerbook (2000), Weight (2005), and The Stone Gods (2007)—that were the opposite to this, that demonstrated a ‘return to the real’, that did not work through her traumatic experience of adoption, but repeated it. Her novels, she posits, possess a tension resulting from the friction of opposing agendas—political versus psychological—that contrast the political/witnessing need for a preservation of the rupture of her traumatic experience with the psychological/personal need for a healing of this wound (45). Her memoir, however, ended on a more positive note, promising a working through, and a healing of the ‘wound’ of her adoptive experience.

In the discussion of Winterson’s three novels, Wiel notes that the author’s personal story does not evolve, that she keeps on telling it ‘to invent my way out of the world’ and because ‘real problems can’t be solved’ (202). I wonder if Winterson has a point here; is it naive to believe in the healing power of literary work? Is it the work itself, or the process of creation that may produce therapeutic effects? Perhaps Winterson needed to repeat her story over until the wound was healed? Did Woolf ‘heal’ her wound or did her eventual suicide reveal that the wound, indeed, was still there? I think it is part of the usefulness of this book that many questions arise from the arguments offered.

She structures her book with an introduction, then seven chapters and a coda, with notes, bibliography, and an index. The first chapter discusses Virginia Woolf’s and Jeanette Winterson’s different approaches to writing the body with respect to trauma. The second, which the author regards as the ‘theoretical backbone’ of her book, explains British Object Relations Theory and its importance to an aesthetics of trauma, and the third chapter applies the author’s approach to Woolf’s ‘Time Passes’ section of her novel To the Lighthouse (1927), showing how, as an example of modernist literature, her novel acts as a ‘container for the unbearable emotions emerging from this historical period’ (18) . A discussion of the modernist approach to aesthetics is followed by a detailed explication of Woolf’s The Waves (1931) with respect to how she tried to ‘break through limits of genre’ (127). In Chapter 6 the author moves on to Winterson’s Art & Lies: A Piece for Three Voices and a Bawd (1994), and then to her memoir, Why Be Happy When You Could Be Normal? (2011) in Chapter 7.

In her Introduction, Wiel provides an overview of trauma theory, introducing the major figures and ideas, from Freud’s paper ‘Remembering, Repeating and Working Through’ of 1914, to Cathy Caruth, Shoshan Felman, Geoffrey Hartman, Ruth Ley, and Dominick LaCapra, as well as Judith Herman, Kali Tal, Roger Luckhurst, and Lauren Vickroy. She examines the effect of trauma on thinking and distinguishes between traumatic, concrete thinking and symbolic thinking, understanding trauma as an ‘overwhelming experience which damages the capacity to think symbolically’ (8). Wiel notes that not everyone subjected to a traumatic experience is affected in the same way, and not everyone develops Post-Traumatic Stress Disorder (PTSD) because of different degrees of resilience. She describes the usefulness of British Object Relations Theory as a ‘refashioning’ of Freud’s theory, to ‘counteract … identification and regain a sense of detachment’ (9). The author goes into detail about Bion’s alpha-functions and beta-elements and the role of the mother in acting as container for the infant’s overwhelming fears and anxieties. This idea of container features throughout the book with respect to artistic work acting as container for the anxieties wrought by traumatic experience.

I wrestled with the complexity of this work, but ultimately gained a greater understanding of modernism and the work of literary production, of Virginia Woolf’s and Jeanette Winterson’s novels, and of different aesthetic approaches to trauma. I think there is a place for both the distancing effects of modernist literature with respect to traumatic experience and the witness-bearing possibilities of both fiction and memoir.