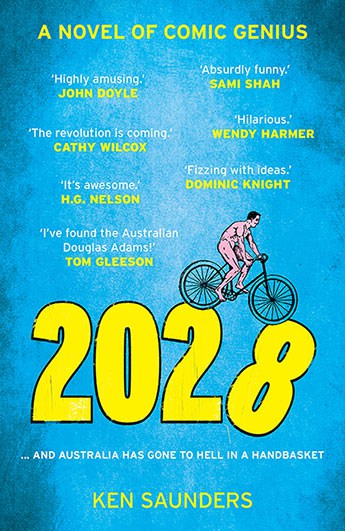 2028 is set in the not-too-distant future in Australia.  The Prime Minister of the time calls a snap election and the book chronicles the progress of the election campaign – a campaign which is full of surprises and comedy.

2028 – the year not the book – is almost within touching distance.  If we are expecting the political future to be better than the present, we will be very disappointed according to 2028 the book.

2028 is a satirical work.  A good definition of ‘satire’ is the use of humour, irony, exaggeration, or ridicule to expose and criticize people’s stupidity or vices, particularly in the context of contemporary politics and other topical issues.  This book meets the requirements of the definition in spades.  A greater purpose of satire is to provide constructive social criticism to draw attention to – in this case – political ills.  Our politicians on both sides of the House could learn a lot from a close reading of this book.

The Prime Minister is Adrian Fitzwilliams although, as he points out more than once, no one but his wife calls him Adrian.  Relying on his political instincts, the Prime Minister decides to call a snap election.  The Greens are in receivership, the Labor Party barely registers as an opposition – what can possibly go wrong?  As the Prime Minister learns to his chagrin, whatever can go wrong, will go wrong.

2028 in Australia is an interesting place.  The Communist Party of China is now a multi-national corporation, radio ‘shock jocks’ are automated, driverless cars are the norm, and there are now things called ‘parkies’.  Created in Queensland – an irony in itself – ‘parkies’ are parking meters with a dual function.  You can also use them to play the pokies – if you win, you can take cash or free parking time.  These ‘parkies’ are so popular that even pedestrians insert money into them in the off-chance they may win.  There is no longer postal delivery by postmen/women.  Instead, drones deliver the mail and – again – have a second function.  The drones provide surveillance cameras for ASIO with not only a visual function but an audio function as well.

Into this political mix comes a new political party – the Luddites.  Everyone in this party is called Ned Ludd [all members have changed their names by deed poll] and they all campaign in the nude.  No one in either the ruling party – the Liberal National Party coalition – or the Labor Party can quite get a hold [no pun intended] on the members of the Luddites.  They campaign naked to avoid the Demonstration Protection Act of 2022 which requires all demonstrators to be security screened at such an intrusive level that no one would subject themselves to the process.  However, if an intended demonstrator is naked, then he/she can walk straight through the screening without a qualm. There is a deliberate loophole inserted in the legislation and the questions ‘why’ and ‘by whom’ are answered in a surprising way later in the book.

The creation of the Luddites came from a desire on the part of one person to look for ‘people who were both informed and original thinkers and, most importantly, people who listened discerningly to the ideas and opinions of others’ [276]. The Luddite party takes out the ‘personal ambition and ego from the political process’ [276]. There is a lesson there for all current political parties – thus meeting the greater purpose of satire which is to provide constructive social criticism.

The book also satirises the over-reliance by political parties on polls to tell them what voters are thinking as in this extract.

Nostradamus [a polling program] could tell you how the Australia people would react to even the subtlest shifts of policy.  Ask it whether voters would react better to the term ‘tax break’ or ‘tax rebate’ and it would give you the postcodes of where each term would work best.  …  It could tell you how many people would prefer to see the Prime Minister wear a striped tie. [37.4 per cent] [117]

2028 is full of such paragraphs – paragraphs which are enjoyable and humorous to read but always containing an element of truth.

Ken Saunders is a master of satire.  The book is a pleasurable read while, at the same time, creating a chill down the reader’s spine at what might be in store for Australia in ten years’ time.

The author has lived in Canada, New Zealand and Australia and has won a number of Australian and Canadian short-story prizes.  He is currently living in Sydney and 2028 is his first novel.