The Magdalene in the Reformation by Margaret Arnold 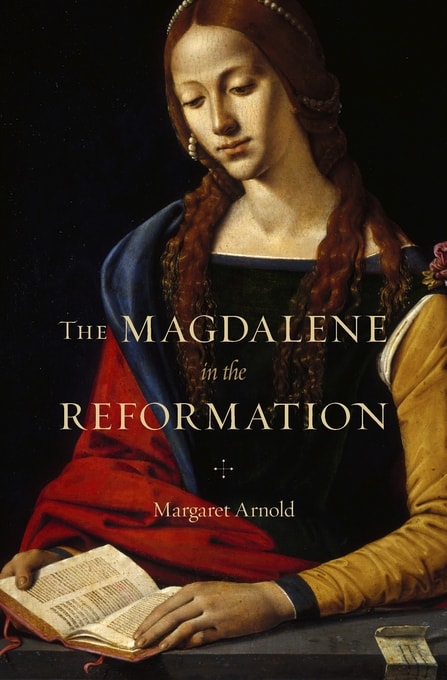 Margaret Arnold asserts the view that the Magdalene continued to figure prominently in the tradition of Passion devotion and in the construction of religious identity on all sides of the confessional divide into the eighteenth century (3). In her book she proposes to examine (a) what was the fate of Mary Magdalene in Protestant teaching and devotional life? (b) Did she really drop out of sight or were parts of her legend used by pastors counselling Protestant congregations and by women arguing for their rights to speak as apostles? And (c) how was her image reformed?

Nobody denies that Mary Magdalene was central to the development of core theologies and institutions of both Catholic and Protestant reform. Nor can it be disallowed that by the time of the Reformation her image was an accretion of all that medieval beliefs could adhere to her. To quote Arnold on this point:

In her was seen the life of the church, the bride of Christ, and the struggle of the individual toward God, ultimately surrendering in awestruck contemplation. She is both self-effacing and bold, the creator of her own cloister and yet somehow still a fallen pleasure-seeker. She had been associated with conflicting impulses within the human character in part because of the multiple identities she had been assigned by the tradition since Gregory the Great (38 – 39).

With the coming of the sixteenth century the Roman Catholic Church sought to limit her image to an emphasis on the abject contrition of the penitent, the converted wanton made compassionate lover of Christ, and the visionary ascetic (41). Protestants, on the other hand, believing in a priesthood of all believers, tussled with the knotty question of who could be allowed to preach to congregations in a church that was founded on the testimony of a woman. These are key to early discussions of the place of Magdalene, and Arnold’s book is not shy at bringing them before her readers. As Bruce Gordon of the Yale Divinity School proclaims, “Arnold poses important questions about the roles of women in the Reformation and the ways in which Mary Magdalene was appropriated as a model. Indeed, the diverse ways in which Mary was a source of spiritual authority, enabling female writers to explore a range of crucial issues, is one of the book’s most significant contributions. The analysis is crisp and insightful, and Arnold has a sharp eye for continuities and change.”

When discussing Magdalene’s ongoing life in Protestant spiritual circles, Arnold examines Lutheranism and its radical offshoots and finds that the saint’s impact is not confined to evangelism but is seen as a compassionate witness to Christ’s sufferings, as a model promoting the value of contemplation as a worthwhile activity, and as a vocation worked out amid the competing claims of loves and burdens. Hence the Magdalene came to retain multiple identities of sister, sinner and saint, none of which waned as the Protestant reformation developed through to the beginning of the eighteenth century. The important point that Arnold comes to again and again is that the Magdalene’s multiple roles were employed by the churches to develop their own particular point of view that required shoring-up. A least one of her facets became a support upon which a particular tenet of faith was promoted. But the extent to which she represented women’s participation was not universal. John Calvin was dismissive of women’s participation in public religious discourse. More strictly clerical leadership evolved as the Reformation took hold (81), but again this was not universal. The view that Christ’s revelation of the resurrection was first made to women was taken as proof of divine endorsement of women’s public ministry.

Arnold’s argument that the continuities from the medieval Magdalene traditions of mystical marriage with Christ, contemplation, and a divine command to preach “point to a more complex evolution for Protestant women’s spirituality than has often been assumed” (92) is a central tenet of the book. While the effect of the Magdalene is pursued in relation to women it does seem odd that Arnold has no in-depth discussion of the Mary Magdalene tradition on the lives of men. I would have thought that if women’s lives were responding to Christ’s call through the Magdalene identity the lives of men would have been significantly impacted as well. Men manage to sneak in for a brief comment: “men also found in her story the solace of the forgiven sinner and an inspiring model of love for Christ and the proclamation of his message” (243).

Observable in the early Catholic cult of the Magdalene was an increased focus on her penitence rather than on her evangelistic role. The Council of Trent (1545 – 1563) stressed the need for the clergy to institute moral reforms and innovations in education and its mission, and for the laity to be developed in the need for informed participation in the sacramental system in order to obtain salvation. The complex figure of Mary Magdalene was seen to stand at the intersection of these initiatives, embodying the ideals of reform and re-dedication. In this regard, Arnold asks the key questions: did the turn towards the Magdalene as penitent sexual sinner weaken her image as preacher and if so, what were the motives behind such a move – to counter Protestantism’s appropriation of the preaching Magdalene or for other reasons entirely? Arnold addresses these questions at some length.

An interesting observation arises from Arnold’s debate. The Magdalenes that emerge from women’s writing, artistic production and patronage in early Catholicism testify to the adaptation of Magdalene images to meet the needs perceived by women in their spiritual lives. The relationship between Mary and Martha was employed to assert the necessity of an active expression for a contemplative vocation. This was a negotiated settlement between the demands and expectations of institutional life and the ineffable call of the spirit. “Primarily a figure of penitence, of divine accommodation to human frailty and of the radical nature of conversion” (198), the Magdalene in Arnold’s view allows a diverse interpretation at the level of popular devotion and literature. Even Calvinist critics dared “to sketch captivating dramas of conversion, pity, and passion on the whitewashed walls of the Reformed imagination” (199).

Perhaps the most informative message from Arnold’s study of Mary Magdalene in the Reformation is that through her, previous conceptions of what a Christian life required of each individual were rejected or refined. From this standpoint the abolition of a compartmentalized understanding of society in which others take on the task of explaining God’s requirements of his creatures was replaced by a model in which individuals discern their own obligations to God and decide for themselves their participation in communities of their own choice. This alone clarifies the murky understanding of the relationship to humanity of Mary Magdalene, a most powerful figure on which contemporary issues relating to women in the church, state, and family were heatedly debated and, most often, resolved.

Let Arnold have the final word in this intriguing and lucid discussion: “An army of eloquent Magdalenes has carried the message of the Gospel through the centuries, despite facing violence, oppression, insult, and mockery. The church owes them its life” (243).

The Magdalene in the Reformation

To order a copy of Magdalene in the Reformation at the Footprint Books Website with a 15% discount click here  or visit www.footprint.com.au