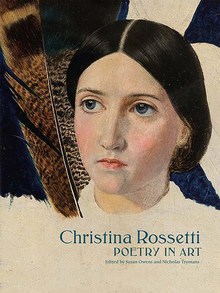 The editors of this book have generated a hard cover, handsome publication of 200-odd pages that is fit to grace the shelves of prince or pauper. It sports a dust cover featuring Christina’s likeness while the text in five chapters appears on very high quality paper supported by lush coloured photographs, most of paintings but some of Christina herself. We are introduced fairly quickly to the concept of artworks illustrating verses or themes. Wending my way through the book I am struck by the succinctness of the writing and the crispness of the images. What’s more, the common fault of locating an image distant from its corresponding text has been avoided in this publication. The book is well finished with extensive notes and bibliography, a section called Sources of Epigraphs, an index, and a valuable list of picture credits.

In their Introduction Susan Owens and Nicholas Tromans claim that Christina Rossetti is among the greatest of Victorian poets, a point of view they might have trouble defending. Mention Goblin Market and Other Poems or The Prince’s Progress and Other Poems to educated readers and few will identify the poet without further prompting. Christina’s brother Dante Gabriel is marginally better known. This is not to cast aspersions on the quality of the verse Christina did write. Owens and Tromans are correct in my view when they write, “Her colloquial style of address and musical clarity speak directly to us today, while her enigmatic words and striking imagery have inspired – perhaps even haunted – artists since poetry first began to be published” (9).

The degree of impact of Christina Rossetti on reading audiences today may have been overstated. However if we confine our discussion to contemporary Victorian audiences we find a receptive readership of Pre-Raphaelite Brotherhood literature and art that re-shaped current thinking. The Pre-Raphaelites formed an avant garde movement in 1848 with the aim of bringing a new sincerity to art and to place literature at the heart of their concerns.  Commencing with the artistic and literary wealth of Rossetti’s family background and proceeding through a whole stream of factors, Owens and Tromans are able to show that hers was a creative life “in which literature was the warp and visual art the weft” (12).

Additional information that I would classify as ‘useful’ is Rossetti as a mature woman with principles not much, if at all, divorced from Victorian society of her day. Noteworthy is a rigid application of diverse principles such as her valuing intellectual depth and symbolism in art, and her sharp criticism of paintings that did not reach her standards. There is a suggestion of repressed emotional expression in Rossetti’s work.

Owens and Tromans take a specific focus in their book. They address the wide, visual context of Rossetti’s life and poetry, “her complicated attitude” (13). Their book is a vehicle in which they claim to offer “a new perspective on a poet whose intense vision continues to captivate us today” (13. I remain unconvinced. Outside of confined areas of academia I see little recognition and no interest in the Rossettis and their Pre-Raphaelite Brotherhood.

The authors explain that the Pre-Raphaelite Brotherhood and the later Aesthetic Movement attempted to forge a closer relationship between visual art and poetry. I accept the doctrine that a poem and a painting may share a common inspiration but remain essentially independent of one another. That is almost a commonplace. It should also be remembered that this avant garde movement was developing alongside a boisterous commercial market, and to be recognized as a poet was a prerequisite for advancement in this environment. Owens and Tromans make that point quite clearly. Christina’s public recognition came with a poem in Macmillan Magazine in 1861 and her collection Goblin Market in the following year. It was then that painters began to explore her verse.

While George Chapman’s sensuous depiction of the human figure drew Christina’s ire, it was Arthur Hughes who became the most prolific interpreter of her work. These details this particular book that we’re discussing covers more than adequately.

Christina Rossetti Poetry in Art is a worthy book to hold for reference purposes. I found it illuminating.

To order a copy of Christina Rossetti: Poetry in Art at the Footprint Books Website with a 15% discount click here  or visit www.footprint.com.au