Professor at Large by John Cleese 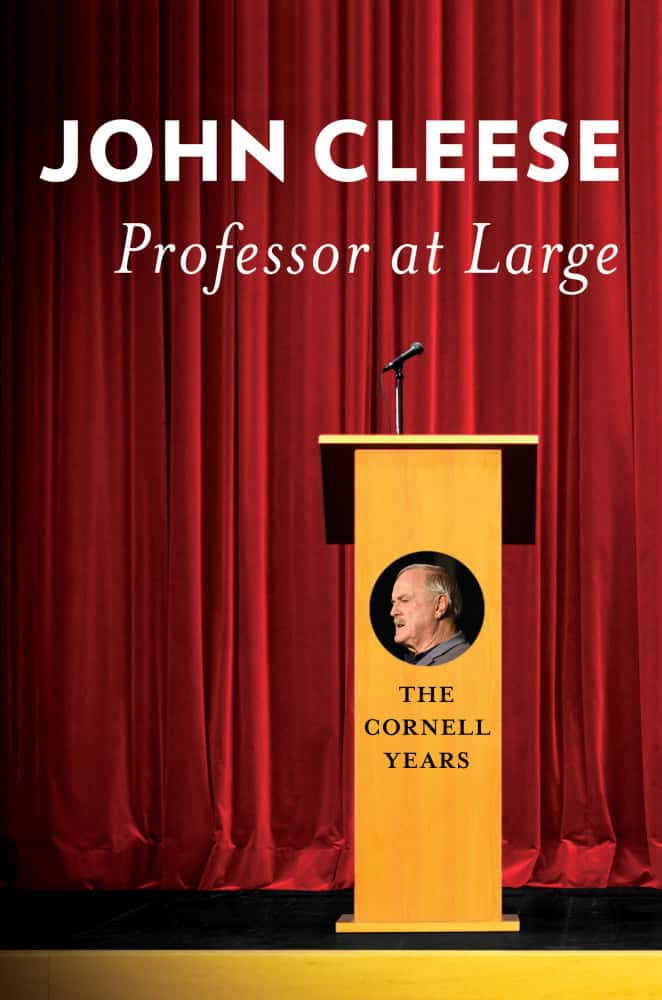 This book is about the man called John Cleese, widely known as a comedian in the popular Fawlty Towers, The Monty Python Show, and The Life of Brian, but his talents as an academic and his correspondingly wide interest in academic matters are not so well known. The book Professor at Large is a collection of events at Cornell University in which Cleese as a Professor in Residence (of one sort or another as his status varies) has played a leading part.

Cleese has always had a close relationship with media and the presentation of self and others. He involved himself very heavily in the comedies for which he is famous. He has a facile, if sometimes an acerbic tongue, and is articulate. He must surely be a huge drawcard for Cornell University. The university should receive due praise for keeping his services for as long as it has. Aside from his involvement in comedy, Cleese opens a window in Professor at Large into capabilities that are not so well known. He has the mind of a scholar, producing talks and leading discussions that reveal an insightful view into research. His sessions showcase the wit and intelligence that has made his name as a comedian. To be seen a numbskull often requires a highly intelligent mind. Cleese has such a mind. Studying his work in this book and in clips and other material an observer can easily identify his knack for pinpointing the essence of humanity and of human problems.

The reason for the present publication is not hard to find. If you have a high profile product who is singing your praises while attracting students who put money in your bank account, you promote him in a book. A book just like this one. Well no, not like this one.

Not this book because the proportions are all wrong. The first entry is an original piece called Hare Brain, Tortoise Mind in which Cleese drags up an idea we’ve all had, but in the hands of Cleese, has all the hallmarks of original thinking, and very enjoyable thinking at that. This chapter’s length is eighteen pages, and its substance was delivered in April 1999.

However, the next chapter is an interview with Bill Goldman conducted by Cleese in October 2000. Goldman apologetically describes what people read about Hollywood as horseshit. That is my take on this chapter. It rambles along for sixty pages in a too obvious attempt to fill in space. In 2018 there is some lingering interest in Butch Cassidy but that film and the rest of this boring conversation have had their day. A conversation about has-been screenwriting with a has-been screenwriter cannot justify a quarter of the book’s space. This is the book at its least attractive.

In Sermon at Sage Chapel we find Cleese at his best. The speech delivered in April 2001 should never be lost to history. John Cleese’s views that there are two types of religion had me laughing aloud and quoting to whoever was unlucky enough to walk by. It all made logical sense. To raise the point that our churches are engaged in crowd control rather than the teachings of Christ required someone smart enough to come up with the idea and comfortable enough to tell it to the world despite the wealthy institutions that immediately became his opponents.

There is a chapter devoted to The Human Face which was recorded in 2001 and runs for forty pages. I must admit I skimmed this chapter as I was intrigued by the next chapter What is Religion? Musings on Life of Brian. This is a thirty-page chapter that was recorded in October 2004. Hardly a page goes by without a memorable quote. In this and the remaining chapters in the book original ideas shoot from Cleese’s mind in an unstoppable flow. The conversations are witty and the responses delivered devoid of patronisation. It is difficult to dispute his point of view when it is so logically and articulately presented even if the substance of his view cuts across traditional thought.

The chapters Creativity, Group Dynamics and Celebrity (about thirty pages in April 2009) and A Conversation with John Cleese (another thirty pages in September 2017) maintain the high level thinking that Cleese has become known for but are crucified by sloppy or no editing. The reader, when discovering with dismay the same Cleesean word usages forgets that these excerpts were made many months apart. Any editor worthy of the name would have removed the most grating of these, and smoothed the transition from one chapter to the next.

That’s why I say, not this book. Somebody needs to eliminate the obvious shortcomings while retaining a vivid picture of a man who has something to say. Cleese has a hugely creative mind. This book should be a repository of his thoughts that readers will dip into. That won’t happen with this present volume, and that is unconscionable.

To order a copy of Professor at Large: The Cornell Years at the Footprint Books Website with a 15% discount click here  or visit www.footprint.com.au