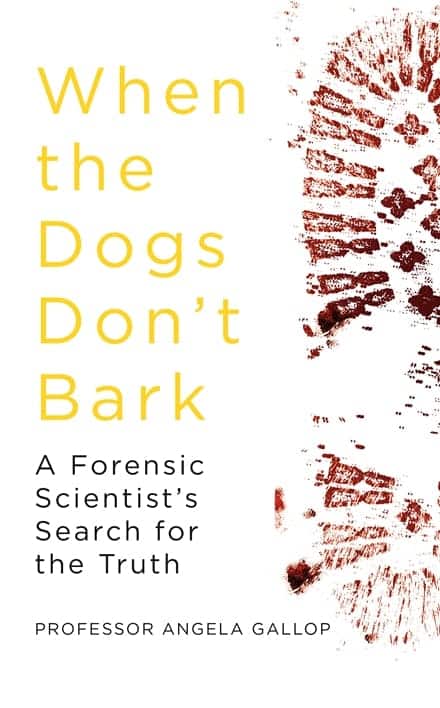 This fascinating book, written by Professor Angela Gallop one of the world’s leading forensic scientists, chronicles personal recollections of her knowledge and work on numerous renowned murder cases. Aa an eminent UK-based specialist, Gallop has “led forensic teams to find vital evidence in many of the UK’s most challenging cases” including the deaths of Stephen Lawrence, Damilola Taylor, Rachel Nickell, Roberto Calvi, Princess Diana and many others. She has given countless talks and written articles about “the use and abuse of forensic science and about how careful we all have to be to ensure its properly understood and used appropriately”.

Together with an interesting prologue, this memoir consists of thirty-one chapters which catalogue a series of famous crimes and forensic approaches to evidence collected at the scene of the crimes. The evolution of scientific knowledge and the obvious implications of these advances in the field of forensic science, since Gallop’s arrival at her first crime scene in 1978 is discussed in great detail. She considers a major misconception that still exists today is that “being rooted in fact, forensic science provides an especially pure and objective form of evidence, and gives clear-cut answers that leave little scope for debate”. Apparently, sometimes ignoring the overall pattern of forensic evidence and not considering the context has led to unsafe convictions. One of the most important principles underlying any forensic investigation is “never make any assumptions because truth is often really is stranger than fiction”.

Presumably the title ‘When the Dogs Don’t Bark’ is a reference to the Sherlock Holmes story ‘Silver Blaze’ when a thief was caught because a dog did not bark on the night of the theft therefore implicating someone close to the victim. The significance of the silence of the dog is that a true inference invariably suggests other inferences, as in the case of the murder of Rachel Nickell when errors were made when police did not find any evidence of Rachel’s DNA in samples they had taken at the crime scene and they did not answer the question – why?

A particularly interesting section of the book is the discussion of the use of forensic entomology and ecology, such as “a case we did for the Thames Valley Police involving a body found face down in a ditch full of water. When John Manlove examined the body, he discovered some fly eggs and pupae on the front fastening of the dead man’s shirt. Flies don’t lay their eggs under water, so John was able to say that the man had been lying on his back for a specific length of time before being turned over and placed in the ditch. In other words, it looked as though his murderer (s) had returned to the scene and re-positioned his body”. This was eventually confirmed by the police following the apprehension of the perpetrator of the crime.

This book is not for the squeamish or faint hearted and Gallop admits to “disengaging the emotional side of my mind” in order to do the work. For her the intellectual pursuit of the ‘truth’ motivates her despite the often-gruesome nature of the work. The painstaking and meticulous investigations undertaken are presented in a highly detailed yet understandable manner. As the author tells us the presentation of complex information in a way that can be understood by members of the public, legal profession and jury members is vital to the credibility of the expert witness providing such evidence.

This book is a scientific memoir of a life dedicated to uncovering the ‘truth’ behind some of the world’s most grisly crimes. An essential read for anyone considering a career in forensic science or a future in crime writing!