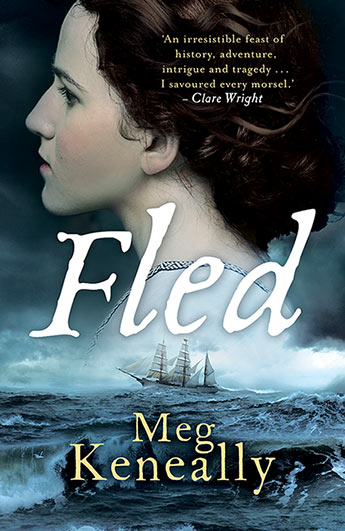 The novel Fled is based on the true story of a convict, Mary Bryant, sent to Australia with the First Fleet, who with her two children and a small group of convict men flee Sydney Cove by commandeering a small boat and taking on a perilous journey to Koepang (Timor). Here they are feted by the Dutch governor as fortunate survivors until their true identity is discovered.

This is Meg Keneally’s first solo novel, but she is no stranger to writing having worked with her father, Tom Keneally, (of Schindler’s List fame) to produce The Soldier’s Curse and The Unmourned, the first two books in the Monsarrat Series.

In the novel Fled the sea plays a pivotal role in the narrative about this heroic woman. It is on the sea near Cornwall that she learns the characteristics of this environment from her fisherman father. It is the sea that transports her miles from her place of birth after she has escaped the noose for robbery with violence. It is the sea and fishing for the new settlement that help her family acquire a hut in which to live and it is the sea which allows her to escape what she believes will be death by starvation as the new settlement struggles to support itself in those early days. It is also the sea that will return her to her beginnings and support her till the end of her days. Much of the narrative of this novel is about sea journeys.

Meg Keneally has chosen to present her novel as a work of fiction for two reasons: so that she can fill in the gaps from what is revealed in historical documents and add emotions and motivations to the actions in the story. The author’s representation of this story centres around Jenny Trelawney (standing in for Mary Bryant) as a wise, strong, determined woman willing to do everything to ensure the survival of her children. She has also a sharp tongue which drives others when they are on the point of giving up. This determination combined with her bravery brings attention to her which is hard for the men around her to endure, when they have followed a similar journey.

The book is broken into three parts.

Part One covers her life in a Cornwall fishing village, the reduction in fish numbers, the high taxes and the death of her father resulting in a life of highway robbery to help support her mother, until she is caught. Instead of being hanged she receives the punishment of transportation.

Part Two is about the harrowing trip on the Charlotte, as it battles the elements on its way to its destination. On this journey she gives birth to a daughter who she names after the ship they are on. On arriving at Sydney Cove, to protect herself and her daughter she convinces a male convict, Dan Gwyn, to marry her and she helps him in acquiring the job of fisherman for the new settlement. The advantages this brings to this family becomes a focus of jealousy from other convicts. Here she bears a son who is not very robust. This section of the book describes the dynamics of this group of people – convicts, soldiers, aborigines -thrown together in this strange land. It also covers the planning and journey of the escape.  When they reach the Dutch colony, they explain their presence as survivors from a wrecked whaler.

Part Three continues with the Dutch governor making much of this brave group with particular emphasis on Jenny. Dan cannot cope with Jenny being singled out for most of the adulation and soon something dark slithers out and wraps itself around Dan’s mind blotting out everything except his need to stand in front of her and intercept this unsought glory. Jenny realises the dangers this could bring and fears that ‘It would be the most appalling cruelty for them to be discovered, to be dragged back down into the darkness. Cruelty, though, was one of the few commodities Jenny had seen in any significant quantity’ (286).

And cruelty they did endure on their journey back to England as prisoners after their secret was discovered. Only two of the party who fled the convict settlement would ever see England again. The loss of her two children, after they had been through so much, left Jenny in a state of depression as she becomes a curiosity, languishing in captivity in London, until a wealthy benefactor comes to her rescue.

What surprises me is that although the exploits of this woman’s life brought her notoriety in England at the time, few Australian readers would be aware of this segment in Australian History. Apparently the story has been told before in a ten episode serial, broadcast by the Australian Broadcasting Commission during 1963. As well as featuring in books, plays and even a musical. In Meg Keneally’s book this part of early Australian history is once again presented this time to a contemporary Australian audience.

This is a story of adventure, intrigue and tragedy and should be of interest to most readers even without its historical connections.