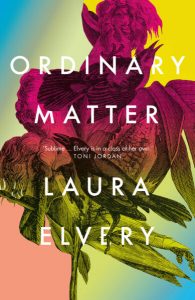 Ordinary Matter is the second publication of Brisbane writer, Laura Elvery. Her first collection of short stories, Trick of the Light, a finalist in the Queensland Literary Awards, was published in 2018. Her 2020 publication consists of short stories in honour of women who have been recipients of Nobel Prizes between 1903 – 2018.

In 1895 Alfred Nobel rewrote his will and left his fortune made in dynamite and munitions to generations of thinkers. Since 1901 women have been honoured with Nobel Prizes for their scientific research twenty times, including Marie Curie twice (back cover).

When I began reading this book I became somewhat confused as to the purpose of these earlier stories and it was not until I read the author’s notes at the end of the book that I discovered the significance of them. Having this information to hand before reading the separate stories would be an advantage to any reader.

The information in the Author Notes, pages 265-273, I found extremely interesting and illuminating as to the struggles women scientists faced in the early years of the twentieth century, especially if they were Jewish. It was lovely to read that, in at least a couple of incidences, the husbands of the women insisted that their wives be recognised for their contribution.

Some of the stories are about the women themselves and talk about incidents that occurred during their lifetime. In other stories I found the link to the prize recipient to be less obvious.

The author has added variety to this presentation not just by the content but by the writing style chosen for each story. Half of the stories are written in the third person with the other half in the first. Some stories have quite a conversational style, as in the story Frost where the narrator is the sister of the artist who painted the portrait of the famous scientist, Dorothy Hodgkin and she is talking to her sister. Reminiscences have a prominent place in many of the stories presented.

Several stories are broken into sections, either by specific years or labelled 1-10. Another story is told alternately by a mother-daughter duo. While most of the stories are around ten to twelve pages long, a couple are in their twenties and one is forty-two pages in length. This is Wingspan, the one told by the mother-daughter duo. It is the story honouring the only Australian woman to be awarded the prize, Elizabeth Blackburn and is about Elizabeth’s aviator uncle who has become ill. ‘That’s like poison’, her mother had said (199).

In the story Grand Canyon, even though it was about a trip Madam Curie and her daughters took when they visited the United States, the author has chosen to tell the story about a young American lad who had been employed to carry their cases and who had become besotted by the younger daughter.

I was somewhat bemused by the improbable story, Something Close to Gold, in which a young couple desperate to have a child, find one washed up on the shore. They ring a number which they read on a placard on the beach, which said ‘Lost on the beach? Found on the Beach? and from here the story unfolds.

The Author Notes section tells the reader that the story Fruit Flies took inspiration from Christiane Nusslein-Volhard, joint recipient in 1995, who supposedly told the Nobel Prize Organisation of her fascination for flies, and how they followed her around in her dreams (270). Snippets of information like this, I found fascinating.

Some of the other interesting story titles in this book, include Titan Arum, and yes this story does feature this large smelly flower; Corn Queen, in which the young Queen of the Parade is so overcome with anxiety that her brother decides to step in for her, only to have the parade sabotaged by a demonstration; The Town turns Over and The Bodies are Buried.

I have nothing but admiration for the women honoured in this book. Many of them were firsts in certain categories – mother and daughter pair and first awards in successive years to women; another had the honour of being one of the first people to see Watson’s model of the double helix. All have added further to our knowledge in physics, medicine, physiology and as a result of their contribution, medical procedures have been improved, more sustainable pharmaceutical substances are now being used, and we have a greater understanding of factors that affect quality of life as we age.

Although these stories cover a wide range of topics and highlight societal issues, I could not get as enthused with this collection of short stories as others who have commented in this publication.