These are not gentle people by Andrew Harding 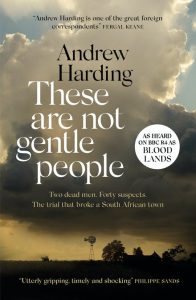 In negotiating the twists and complexities of a crime committed in South Africa’s Orange Free State, the esteemed British journalist, Andrew Harding, has produced a detailed account that is scrupulously balanced.  He avoids any judgments and political or historical bias.  Instead, his book, These are not gentle people, is a portrayal of a fragile society in search of a form of justice.

The crime involves a double murder of two young black Africans, Simon and Samuel, who have gone to their elderly former employer who owed them wages but refused to pay up. So they stole some sausage meat from him and he chased them with the nearest weapon, a mop.  The Afrikaner phoned his sons and they contacted friends on their mobiles.  In their cars, the men pursued the two, caught them and violence followed. By this time, about forty men had gathered, family, friends and neighbouring farmers.

The beating that followed used varied means. Some of the group bashed, punched and kicked the now helpless victims. Eventually realising the pair needed medical attention, the protagonists threw them into the nearest truck and drove to the local hospital. The now unconscious patients later were transferred to Bloemfontein where Simon and Samuel were pronounced dead.

All this occurred in 2016. It wasn’t until early this year, when Covid 19 had descended on the world, that the final verdict was handed down.

In the interim, dramas and tension gripped all connected. Families were stressed and the five men who were eventually accused endured financial loss and even marriage breakdown. Friendships were shattered by some of the original party of aggressors turning prosecution witnesses or ‘204s’ as they were called.

The impoverished families of Simon and Samuel, especially Ruth, Samuel’s mother, struggled to continue their battle to survive, weighed down by anguish and loss.

The judicial process lumbered on, with changes in magistrates, implicating WhatsApp data, and questions over the expertise of pathologists and the honesty and reliability of testimonials.

Race plays a role, but, in the Africa of today, the white population fears the system is skewed in favour of black people – an attempt to balance colonial wrongs. In addition, some black workers side with their white employers.

The once brittle harmony of the town of Parys and its surrounding farms was threatened, and it was this Andrew Harding sensed and it compelled him to follow the case to its conclusion.  He believed that this community could be ‘the nearest thing I’ve come across to a microcosm of South Africa’.

In writing These are not gentle people, he has related a painful, torturous story from multiple angles.  Attempting to do this as a real-life event shaped as a work of non-fiction can be a daunting challenge. In fact, it is obvious he has been meticulous in the approach he followed and succeeded in winning frank cooperation from the defence, prosecution, and many others impacted by the two deaths.

He has demonstrated that more than one reality can co-exist and wounds may heal when another’s truth is acknowledged.

Finally, he describes a poignant scene. Ruth visits her son’s grave in a wasteland that is the cemetery where he is buried.  The only trace of his grave is a mound of earth on uneven ground and maybe the cement cross with 2016 inscribed. Scattered around it are bottles, cans and the odd cement block.

These are not gentle people