The Warsaw Orphan by Kelly Rimmer 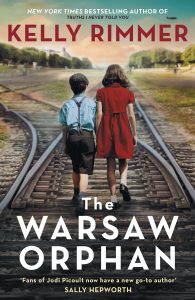 As one would expect, this novel deals with that terrible period in European history when the Nazis overran Poland and locked many of Warsaw’s Jewish population behind a wall. The novel tells the story of brave individuals who withstood German might in ways that seemed insignificant but had an effect more important than they might first suggest. Rimmer could have chosen any number of ways to tell this story. Her decision is inspired.

The book opens with a tale of a sliver of soap. It is 1942 and the people of the Warsaw Ghetto are starving. Roman and his brother plan to trade a piece of soap for some food for their sick mother. Their interaction with the street vendor throws light on the character of both boys and the vendor. The anecdote reaffirms the opening sentence that, “the human spirit is a miraculous thing. It is the strongest part of us – crushed under pressure, but rarely broken” (1).

While Roman is distinguished by his initiative and the vendor by her generosity, Roman’s stepfather Samuel finds it more comfortable to believe that life is hard but not hopeless. Hiding from the truth he reiterates, for his own peace of mind, that, “I need to believe there is some hidden depth of grace within these men who torture us, because if there isn’t, then all hope is lost…[for] this evil could emerge from the souls of men again and again and again” (19 – 20). Rather than admit that Jewry was doomed under Nazi rule, he represents that group of Poles who searched for signs of hope in the most iniquitous circumstances.

Rimmer provides an insight into Emilia’s assessment of her own character with a little homily on rebelliousness in the opening of Chapter Three (23). She calls herself “somehow both wise beyond my years and emotionally stunted” (23). She becomes firm friends with Sara, despite having to disobey her adoptive parents. Rimmer sums up Emilia’s rebelliousness in this well-structured paragraph:

When contemplating the characters Roman, Samuel, Emilia, and Sara, I am reminded of the passage from Brihadaranyaka Upanishad (IV.4.5), “You are what your deep, driving desire is. As your desire is, so is your will. As your deed is, so is your destiny.” Roman is driven to take action, Samuel to let things slide, Emilia to do what she sees is right in spite of the consequences, and Sara to serve. Roman’s mate Chaim gives his life to save his friend (204). There is some thought given to what playing a part in the Resistance means – “[it] isn’t even about winning a battle…maybe it’s just about being true to your values. About standing up for the things you believe and those you love, even if you know you can’t win” (Elzbieta, 168), but the discussion goes no deeper than that.

The book concludes in a rather longwinded way. There is much to cover, from the horrible excesses of the advancing Russians (circa 336) to the transition of the chief characters into peace (384). The moulding of Roman under the strong, guidance of Elzbieta is particularly well written.

Kelly Rimmer is a marvellous writer with a long list of credits to her name. She has sold more than a million books in more than twenty languages. She lives in the Central West of NSW and is inspired (I’m certain) by her ‘fantastically naughty dogs, Sully and Basil.’