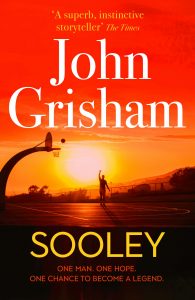 Over many years I have followed John Grisham through the medium of his novels. Books like A Time to Kill, The Firm, The Last Juror and The Runaway Jury together with so many others have kept me entertained for hours on end. There has never been any doubt that Grisham can write. His long, long list of publications attest to the public’s faith in him.

I imagine that readers of Sooley will be wondering what happened. Those, new to the Grisham experience, will certainly not return. I don’t know the reason why Grisham chose to write on a topic that could not be more different from his usual, always acceptable, fare. The new topic is a brief history of a man who plays basketball. He plays the game remarkably well. The man is Sooley, a citizen of war-torn Sudan, whom a visiting talent scout recognized as possessing true genius in a specific skill and capitalized on it by bringing Sooley to the USA. However, what is left of Sooley’s family is in a refugee camp in Uganda. Their circumstances are a regular source of worry to the young athlete.

Important though Sooley is to the plot, he is not the central focus. That belongs unashamedly to basketball. Consider the statistics and their content matter. The first thirty-five pages (10% of the book) deal mostly with Sooley’s life as a young boy in Sudan. They include his potential as an athlete and conclude with his catching a flight to the USA. Pages 36 – 271 (235 pages or 66%) are devoted to a microscopic examination of each game that Sooley’s team played in their short career. The final 24% explores Sooley’s confusion over whether he should or should not accept an offered fourteen-million-dollar contract to play amongst the professionals during the following season. Of course, there was never any doubt about what his decision would be.

I was immensely disappointed with this book. I was angry with the attitude of disregard that the author displayed towards his readers. It is not inaccurate to say that Grisham, being absorbed by basketball, has simply cast aside the millions of readers of his works who have no interest, or limited affiliation, with basketball. Passages such as the following are representative of the material readers are expected to be enthused about, game after game, page after page:

Murray lost the ball, clawed it back, bounced it to Mitch Rocker who had it slapped away. A scramble ensued as players on both teams dived for the ball. It squirted free from the scrum and Sooley scooped it up at mid-court with two seconds on the shot clock. Without hesitation, he sprang high and aimed at the rim. It was not a hopeless effort to beat the buzzer. It was not a Hail Mary. Instead, it was a smooth, confident, perfect jump shot from 42 feet that found nothing but net. The Central bench went nuts. The small crowd screamed (195).

To be fair I have to record that the narrative switches at irregular intervals to keep the dire happenings in the Sudan and Uganda in the fore front of the reader’s mind. However, the attempt to dress out the book into something recognizable as a novel fails under the onslaught of the space given to actions making up amateur basketball games.

The end of the story was unexpected and unlikely. Sooley has appeared throughout as an intelligent and sensible young man. His behaviours as the book concludes do not fit the mould into which he has been cast. The hagiography bestowed on him by the public – the speeches, the demonstrations, the mother’s extraction from Uganda in a CIA style operation, her carefully orchestrated grief at her son’s funeral – is not unknown with Americans. Readers from other societies prefer not to respond in the over-the-top, highly charged atmospheres the Americans prefer.

Mr Grisham would please this reviewer if he returned forthwith to the law courts.