When the Dust Settles by Lucy Easthope 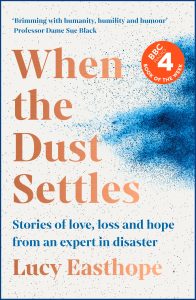 Professor Lucy Easthope is the United Kingdom’s leading authority on recovering from disaster, whether that is as a result of earthquakes, tsunami, fire bombings or war. Lucy has been at the forefront of the development of policy and practice guidelines in partnership with governments for most tragedies that impact on populations around the world.

Lucy grew up in Liverpool and has a degree in law, a PhD in medicine and a Master’s degree in risk, crisis and disaster management. She has most recently been advising the Prime Minister’s Office on the Covid-19 pandemic. She has written one other book; The Recovery Myth: The Plans and Situated Realities of Post-Disaster Response and co-authored another titled Mass Fatalities: Reflections on Planning and Managing Death in Disaster.

This book focuses on Lucy’s role in preparing for disaster by developing responsive policy and having procedures in place although sometimes, as she tells the stories, it is not always possible to be so prepared.

The author identifies the disaster that shaped her most profoundly occurred close to home, when on the 15th April 1989, at the FA Cup semi-final at Hillsborough Football Ground in Sheffield, the stadium collapsed resulting in the death of ninety-four people who were crushed against a fence on that day. This was when she learnt that terrible things can happen but also that the people in charge – the state and its agencies – make terrible mistakes.

The disaster work that she does is multi-disciplinary, drawing on law, forensic science, politics and social justice and activism and obviously her qualifications add so much knowledge to her work.

Throughout the book, the author acknowledges her special interest in the families and how they are best supported and kept informed after a disaster has occurred with a commitment to truth and honesty as it can best be delivered. She explains the intense effort that is put into ensuring that a victim’s personal effects are painstakingly gathered and returned to the family as a mark of respect – and to aid in the healing process.

As the reader of this book, I learnt so much about what goes on behind the scenes when a disaster has occurred or is even threatened, such as Lucy having to plan how many coffins and body bags would be sent to a war zone – how do you work that out?

The Endnotes of the book which are referenced in the text are very informative, adding extra detail of the events noted during her accounts of the incidents that she witnessed or became involved in. I also enjoyed the author’s sharing of her family details – sometimes very sad and others quite happy.

This book should be of particular interest to those readers who need to know more. More about how recovery is planned, how for example, gathering even the smallest pieces of even a last-minute note can identify a victim through DNA.

All in all, this is an informative and engaging read for those who are not squeamish about delving into the details of horrible events.

When the Dust Settles