The Shortest History of India by John Zubrzycki 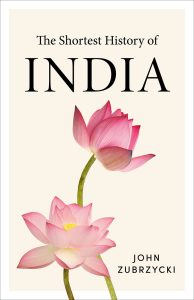 India, with its long history and diverse cultural and religious life, has been an enduring source of fascination and wonder for people over many centuries. John Zubrzycki has taken up the challenge of encapsulating this history into a book of less than three hundred pages. Many authors and academics would blanch at the thought, but Zubrzycki has risen to the occasion and offers us a fascinating insight the creation and development of the second most populous and the most populous democracy in the world.

In some circles what Zubrzycki has done is produce a survey that really is an invitation to delve further into the extensive literature that is available on the different areas of history and culture he introduces through the chapters of the book.

Zubrzycki makes the point that India’s long history has stood it in good stead as various invaders and empire builders have tried to subjugate both the land and its people as well as imposing their own form of governance and religious way of life.

The modern reader often believes that the territory we call India has existed since the beginning its history. Modern India, Pakistan and Bangladesh are very recent inventions that came into existence with the departure of the British in 1947. Prior to that, the whole sub-continent was one unit though at different points was more a collection of self-governing states than a unified nation.

Though I have read various books on India including William Dalrymple’s extensive book on the East India Company, I always seem to find something new even in a shortest history such as this one. Modern India reached back into its illustrious past to find the image that would become the official emblem of its independence. The image is of the lion capital the most famous of the Asokan pillars discovered at Sarnath. It is used on coins, banknotes, stamps and seals. As well the dharma cakra (wheel of law) that appears on the image appears on the Indian flag.

Even though The Shortest History of India is an easy book to read, the reader cannot say that having finished it that they have covered everything there is to know about the sub-continent and the nations that are found on it. Zubrzycki reminds us that India, Pakistan and Bangladesh are connected to their past as well as each other even though political and religious tensions often affect relationships at all levels of society.

For Zubrzycki, India, as a civilisation, has shown great resilience. It has tackled challenges such as inequality and authoritarianism and provided a model for the world. India has much to draw on from its past and more to offer to the modern world. As he says, its greatest moments are yet to come if its citizens are given the chance to achieve their potential.

John Zubrzycki is an Australian author who has been studying Indian history for more than forty years. He has worked in India as a diplomat and foreign correspondent, taught Indian studies and written extensively on Indian society, culture and politics. He majored in history and Hindi at the Australian National University and has a PhD in Indian history from the University of New South Wales.

The Shortest History of India